This year for Halloween I was Gene Takavic. Gene manages a Cinnabon in Omaha. If you watch Better Call Saul, you’d be familiar.

It was a relatively cheap costume to throw together, but sourcing the gear to make it happen – and getting the colors right – was a challenge.

I used three reference photos to figure how to to make this happen.

Here’s a good detail shot of his glasses and facial hair: 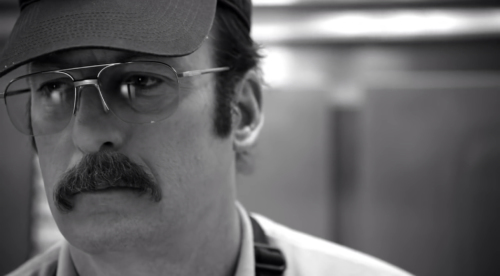 Gene’s on-screen appearances have always been in black and white, so getting the colors right was tricky. I found a rare behind-the scenes photo of him in color: 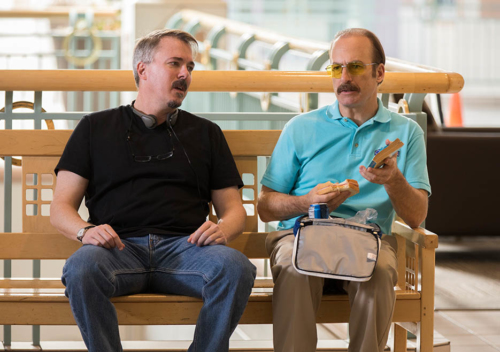 That gets you close, but he’s missing an apron and visor.

Here’s a clear Photoshop job from an AMC promotion (the shirt and apron are missing logos) but it at least reveals that brown is the apron and visor color, and his glasses have a yellow tint: 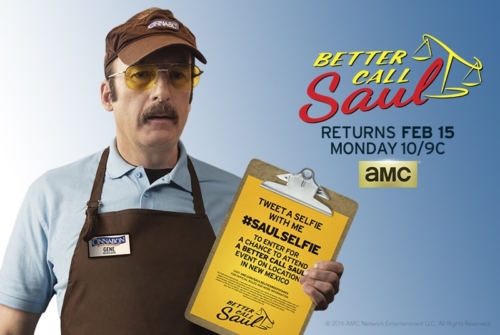 My first stop for sourcing all this stuff was, of course, Cinnabon. They were remarkably unhelpful.

Cinnabon’s social media team, email team, and local franchisees were unwilling and/or unable to sell me any clothing that contained a Cinnabon logo.

In an act of desperation I even reached out to Cinnabon’s VP of Global Marketing on LinkedIn. She completely ignored me. No one was willing to sell me any Cinnabon-branded stuff, so I had to make it myself.

Luckily, it wasn’t that hard…

Avery InkJet Iron-On Dark T-Shirt Transfers, White: You use an inkjet printer to print Cinnabon logos onto these special sheets of paper, and then use a hot iron to melt/glue those printouts to fabric. They say it’s for 100% cotton or cotton/poly blend fabrics only, but I was able to make it work on a 100% polyester apron with no problem. You’ll use these transfers to apply Cinnabon logos to the polo shirt, apron, and visor.

You’ll of course need the Cinnabon logo.  Note that this is not their current logo – it’s their older, pre-2016 logo because that’s when the show is set.

SEW UR LIFE Brown Professional Bib Apron: While it’s not labeled as such, this is a ‘butcher’ apron – one that goes down to your knees. Gene wears a brown butcher apron. It’s 100% polyester, so you’ll want to go easy with the iron so you don’t melt it or cause it to ripple.

Dealstock Plain Men Women Sport Sun Visor Adjustable Cap: Even though this visor is made of 100% acrylic, the iron-on transfers worked just fine. The trick was ironing on a curved surface. I did it against a round ceramic kitchen container that I normally use to hold flour.

Amazon Essentials Men’s Cotton Pique Polo Shirt: This inexpensive aqua/teal shirt is 100% cotton and a close-enough match to what Gene wears. This shirt has two buttons, while Gene’s has three.

Titanium Half Rim Frame: I looked everywhere for Gene’s exact model of glasses, but came up empty. The closest I could find were these frames from Zenni Optical. Luckily you can order them with custom lenses, and I did exactly that. Optical grade non-prescription lenses with “Standard Lens Tint Yellow-50%” can be yours for under $30.

Winchester Fake Moustache, Medium Brown: Ideally, you’d grow a mustache. I grew my own in two weeks, but should have given it more time. If you struggle to grow facial hair, this one should do the trick. Use spirit gum to attach it to your face.

Namebadge and button: I could have probably made these myself by slapping a sticker on top of existing pins, but I found a website that had them ready-to-go!

Anyone who watches Better Call Saul will know who you are right away and lose their shit. Anyone who doesn’t watch the show will still love this costume and laugh as soon as they see you.

Update: The photo of me up above in full costume eventually made its way to the Better Call Saul writers’ room, and my name ended up getting written into an episode in season 4.  All because of this!