I’m a huge fan of the Nest thermostat. I installed one about a year ago and it’s been humming right along since then.

But I’ve been thinking.

The Nest is pretty smart. It can be even smarter.

There should be some way to feed Nest temperature data from as many different locations in a home as possible. Without that data, all you’re really doing is effectively controlling the climate of the area immediately around the Nest itself. While Nest brings to the table a lot more than a standard programmable thermostat, this is one vestigial limitation that it hasn’t (yet!) managed to shake.

I’ve got a vision for Nest and came up with some illustrations that maybe they’ll take to heart. Probably not, though. I emailed them to a few people at Nest and while I haven’t gotten any replies, they haven’t bounced back either…

I’m not the best at UI/UX design (to which 350,000 screaming DreamHost customers can attest) but I think these get the idea across.

This is the Nest Egg: 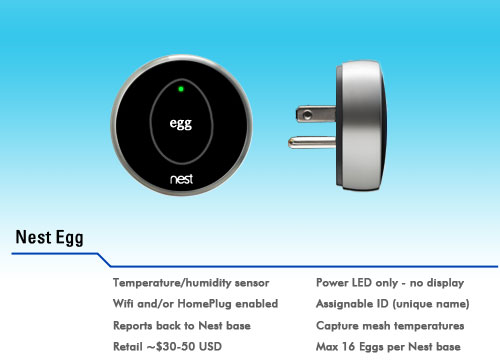 It’s a simple, plug-in thermometer. Minimal power drain. You put one in each room that you want your Nest to know about.

Eggs monitor temperature and humidity, and they report them to your Nest base every 30 seconds or so using either Wifi or HomePlug.

That’s an Egg’s only job.

As far as your Nest base station is concerned, an Egg is just a room full of temperature.

Without an Egg (or something like an Egg) right now there’s just no way for current Nest hardware to capture additional data about various zones in your home.

But why would it need all that extra data? This is why: 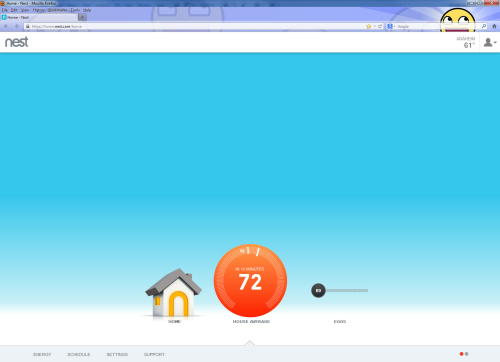 “House Average”. That’s what it’s all about.

Now, instead of knowing the temperature in the immediate area of your Nest, you’ll have access to a zoomed-out snapshot of your entire home’s average temperature at a glance.

And, instead of commanding your Nest to modify the temperature of a limited sensory area, you can now direct it to look at your house as a whole and work to modify the climate in a much more meaningful way.

For most people, that’d be more than enough of a performance gain to justify the added cost of the Eggs.

Some people might crave even more control, however, and for that there is a new “Eggs” icon within the management interface… 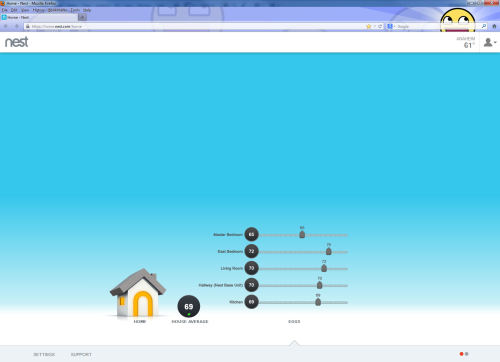 This is where it really gets interesting. Here you can view the current temperature of every Egg in your home. You can even direct the Nest to turn on your HVAC system until any single Egg reaches your desired temperature, irrespective of Nest’s programming or of your home’s current average temperature.

In homes like mine with two stories and only one thermostat, this is key. Temperatures between floors and between rooms can vary wildly, and this fine level of control would make the Nest even more valuable.

Maybe you want it to be 70 degrees in your bedroom when you wake up every morning. With current Nest hardware (or with any thermostat) there’s no way to guarantee that that will happen. You can only guarantee temperatures that the Nest can sense, and right now I’d guess it’s blind in 75% to 95% of most homes, making only educated guesses using the two temperature data points to which it has access: that of the zip code outdoors, and that of the Nest’s single location indoors. 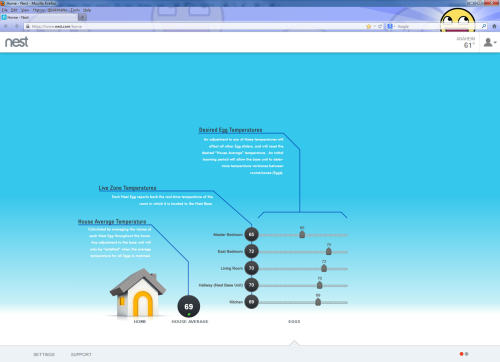 After a brief initial learning period, the Nest would know which temperature trends to expect across Eggs. The Master Bedroom might run about 5 degrees warmer than the Office in the mornings and 7 degrees cooler in the afternoon. Each Egg’s slider would move relative to the others.

What I’m ultimately after here is a way to give Nest users the freedom to change either a home’s average indoor temperature, or a way to adjust the temperature to serve the needs of any one specific room. 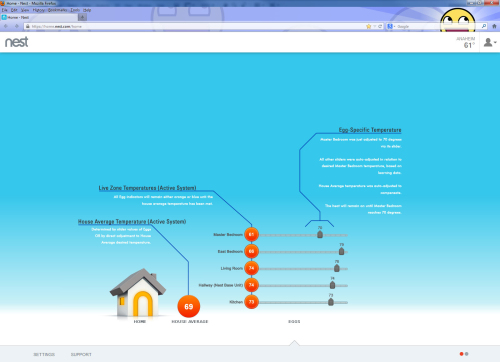 I realize that this approach adds a layer of complexity for not only Nest’s engineers, but also for its users. It certainly has the potential to make a homeowner’s programming job a lot more challenging…

That’s why Eggs would be an entirely optional add-on accessory. Don’t want to shell out the extra cash for one? No problem. With or without Eggs, the Nest that you’ve got on your wall today will continue to operate as it always has (smartly, but still mostly blind) for years and years to come.

However, if you’ve got a large home or even just an average-sized home with inconsistent indoor temperatures, Eggs would radically change the way you use your Nest (for the better!) and could fundamentally change way people think about what thermostats are, how they work, and how we interact with them. The original Nest already did something like this – to great effect!

But there’s no need to stop there.

Nest shouldn’t be just a single product. It could be the start of an ecosystem. And while Nest Labs hasn’t really launched anything beyond V1 and 2 of the Nest itself, it’s certainly got the right name for a larger product line. Eggs could just as easily be called Sparrows. (And, in fact, that’s probably a better fit!)

Maybe some day I’ll tell you all the great ideas I’ve got for what a Nest alarm system would look like.

The entire home alarm industry is what I would characterize as “consumer-hostile” and is ripe for a disruptive revamp. I could go on and on about the state of the home alarm system industry, but the Internet’s already got enough angry people so I’ll can it for now.

Thanks for listening, pals!

UPDATE: I lied.  I couldn’t shut up about alarm systems, either.