Mel Henke was a pretty straight-laced guy.  He was a masterful piano player and earned his living scoring commercials and a few TV series from the late 50s and into the 60s.

Most of his studio albums were, to my ears anyway, pretty conventional arrangements of then-current-day hits.  Nothing to write home about.

But his 1962 masterpiece, La Dolce Henke, is another thing entirely.  It’s a bunch of jazzy compositions, mostly original works, punctuated by instrument-based sound effects peppered with suggestive double-entendre voiceovers.  It’s classy stuff that may have been considered mildly scandalous back in the 60s to its intended audience of shorthairs.

Lucky for you it’s a part of Basic Hip’s free samples for a limited time.  Grab it while you can. It’s definitely one of my favorites from the sharity scene. 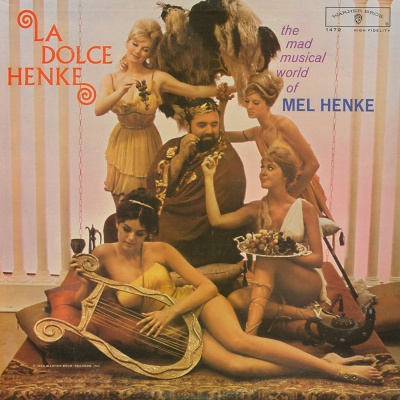 Update: It’s been removed from the free samples. Out-of-business record label Scamp re-released it on CD back in 1997, and you can find it from a few sellers on Amazon: La Dolce Henke