Thomas Wagner managed to escape from East Germany in 1979. His incredible story is online.

Werner opened the small latch and pulled a small bundle from the wooden plank. Tightly wrapped in plastic, to protect it form the elements, the bundle was approximately the size of a postcard and about 1/4 in thick. When the plastic was removed the package revealed several items. It contained 10 pre-addressed envelopes, an equal number of pre-written letters, it also contained invisible ink cartridges and a one-time use pad of cyphers in the form of small mircrofilms.

Speaking of shortwave… Check out Ears to Our World, a nonprofit organization that’s been distributing shortwave radios in developing countries. A set of batteries can often cost a weeks’ wages in some parts of the world, so the radios are also crank-powered. 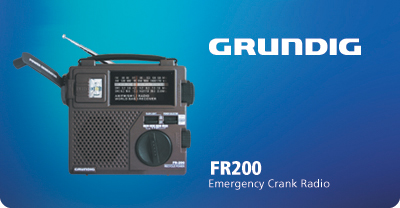 The FR200 is definitely an entry-level radio, but they get the job done and Eton’s been supplying the radios for next to nothing – a $30 donation pays for two.

ETOW is featured in the May 2010 issue of the Wall Street Journal magazine.