CFLs are mostly wonderful. They have a few huge problems, but for the most part they’re a good replacement for incandescents. 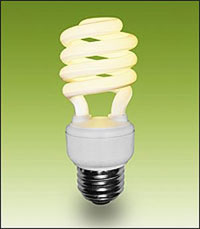 Most people don’t like CFLs because of the blueish light they often produce. I agree, that really sucks! But it doesn’t have to be that way.

Manufacturers use terms like “cool white,” “soft white,” and “daylight” on the packaging to tell you what color their lights produce, but different companies use different terms and they often mean completely different things!

The key to buying a CFL is to pay attention to color temperature. Temperature is measured in Kelvins and is usually buried somewhere in the fine print on the back of the package.

2700K is about as close as you can get to the color of an incandescent bulb and it is definitely not blueish white! You can put a lampshade on a 2700K CFL and never know it’s not an incandescent. Anything higher than 2700K and you start to get light that looks less and less like an old-school lightbulb.

Just hope that you never have to find a dimmable CFL. They’re nearly impossible to find at retail and have their own set of problems.