When I first read about the upcoming Battlestar Galactica panel discussion at the United Nations, I thought it was a joke.

But no, it really happened. Last night. Whoopi Goldberg was the moderator. 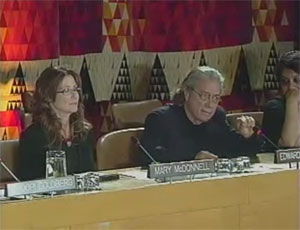 In the most provocative moment of the evening, Olmos angrily declared to the audience that race and racism are illusory concepts, created by oppressors to encourage hostility toward other cultures. “There is only one race, and that is the human race!” he shouted, before inciting the crowd to chant along with him, “So say we all!” over and over, in a moment that paralleled Commander Adama’s inspirational speech at the end of the BSG pilot.

The two-hour series finale is this Friday. 🙁 I wish it would just go on forever.