Grey’s Anatomy has been doing some weird stuff this season.

* Callie and Dr. Hahn had just started their whole gay relationship thing when all of a sudden Dr. Hahn just vanished into thin air, with no real explanation, never to be seen again. The Internet claims network interference may have been to blame.

* Denny’s back…as a ghost…and Izzy’s been sleeping with him. I still can’t believe this insanity was allowed to permeate more than one episode. She’d better have a brain tumor and not just be ‘crazy’. Denny must have the easiest job in Hollywood right now. “Follow Izzy around, say one or two lines, pick up paycheck, repeat.”

* Interns got caught operating on themselves in a storage room with stolen supplies, someone almost died, and nobody lost their job. Nobody at all!

The good news is that President Roslin of Battlestar Galactica has guest-starred on the last two episodes of Grey’s as a surgeon with Asberger Syndrome. I hope they make her a regular character, because she makes me smile.

Speaking of Battlestar… The last half of Season 4 starts January 16th, and a 13-minute recap video of everything so far is here. (They did a similar video between seasons 3 and 4). 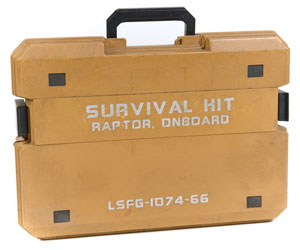 At these prices I don’t plan on placing any bids, but it’ll be neat to see everything up close…and maybe get some photos of Kate sitting in a Viper cockpit.