This American Life is my favorite show on radio.

Whenever David Sedaris writes a dumb story about a talking cat and a chipmunk they throw that in to appease the hipster NPR hoi-polloi, but the real meat and potatoes of the show is real life stories from average joes.

This week I learned about Studs Terkel. He died recently but not before making a name for himself in broadcasting, in part by interviewing ordinary people about extraordinary things- The Depression. World War II. Race relations in the 60s. 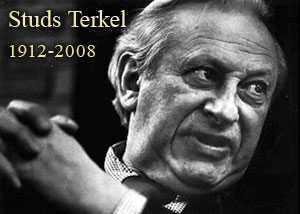 Unfortunately the only way to listen to most of his recordings is to trek out to some museum in Chicago, but there’s quite a bit to listen to on his website at the links above as well.

And then of course there’s Story Corps – an organization whose entire existence is devoted to preserving oral histories of everyday Americans…or at least brief snippets of them. They have a podcast now too.