Getting a network connection to my TV area has always been tricky. Tearing up drywall to install cat5 all over the place wasn’t an option, so I was pretty much stuck with WiFi.

The distance and number of walls between my wireless router upstairs and TV downstairs make it tough to maintain a good strong signal. Even with the Tomato firmware pushing my wireless transmitter strength to its theoretical maximum, it still just wasn’t that great. 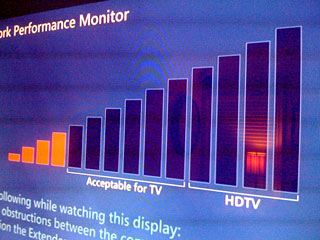 I could still play games and stuff, but if I tried to stream my own music over the 360 while playing an online game at the same time, every now and then the music would skip.

I got fed up a while back and looked into networking over power lines. The HomePlug standard seemed like it had good potential and with a max speed of 14Mbps (or 85Mbps with ‘turbo’ hardware) it still had to be better than what I was getting with my wireless connection. I bought two HomePlug adapters from Netgear.

That was better! But not by much. 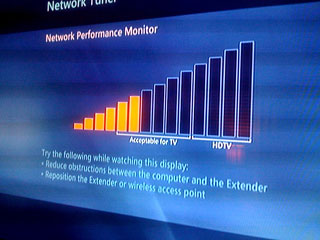 Then HomePlug AV came along promising speeds up to 200Mbps. I was skeptical. So when I was invited to take part in a beta for Netgear’s first HomePlug AV adapter, the XAV101, I was not expecting much.

I was amazed and surprised to find that HomePlug AV is incredibly awesome in every way, and it works just like you’d expect it to. Finally! 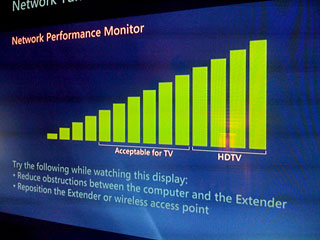 I didn’t bother to run any real speed tests with a laptop, but that graph’s good enough for me.

The beta ended long ago and you can buy the XAV101 NOW. A pair of them (XAVB101) goes for $120 at Amazon. That’s not exactly cheap, but consider the cost of hiring an electrician to come out and run ethernet cables through your walls, then hiring a painter come to patch the holes the electrician made and paint over them. It’s a no-brainer!