Have you been watching Breaking Bad? I love that show. 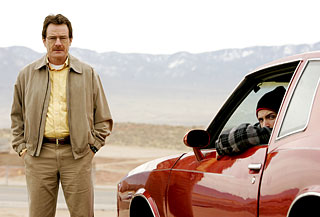 Brian Cranston plays a high school chemistry teacher who is diagnosed with inoperable lung cancer. His HMO won’t cover his chemo, so in an act of desperation he reluctantly hooks up with a former student who is now a small-time drug dealer. The two of them start cooking up crystal meth out in the New Mexico desert to pay for his cancer treatments, and hilarity ensues. That’s just the first episode.

It’s kind of a dark comedy.

Season 1 was only seven episodes long, so if you’re looking to get into a new show without having to invest a whole lot of time, now’s your chance. It’s on iTunes, Unbox, and of course The Pirate Bay. Or, you can go old school like me and just watch it when it airs on AMC. Season 2 starts this fall.

And hey, thanks to the power of Facebook and IMDB I just discovered that one of my old high school pals was the post-production supervisor on four of those first seven episodes! Go Andy!