I installed the new Wii Homebrew Channel over the weekend. The whole process took about two minutes and I couldn’t have screwed things up if I tried. 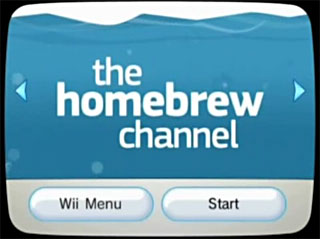 The first thing I did was load up an SD card full of emulators and minutes later I was playing Pilotwings with my Wiimote. Pilotwings! Somehow I always come back to Pilotwings.

This doesn’t break any laws (I own the cartridge!) and seeing as how there’s no hardware modification involved I’m guessing it doesn’t even void your warranty…but just to be safe I blocked my Wii from hitting “*nintendo.com” on my router, so its ‘phone-home’ capabilities have been neutralized!

Anyway, the entire process of getting this up and running was embarrassingly quick and easy, especially for what is now the number one console in the Americas.

Whose idea was it to put an SD slot in this thing anyway? I bet he/she’s sweating bullets right about now.