“I like to practice my thinking in a darkened room, alone. I focus on one thing, such as Tree. I think about Tree. Then, after that, I think about Cloud. Then later, as I walk outside, I see Tree and since I have practiced thinking, I avoid hitting it. I try and have six or seven thoughts a day.”

– Steve Carell on How to Act Brilliant

There’s this lady on the Internet who’s a big fan of The Office. She runs a fansite called Office Tally.

She’s such a big fan that NBC has invited her to hang out on the set of the show for the last two seasons! 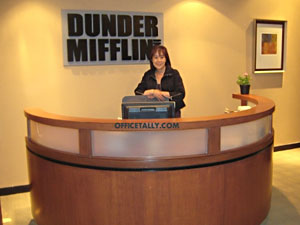 There’s plenty of photos in her blog entry from Sunday. Neato!