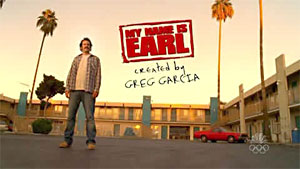 Seasons One and Two: Hilarious hijinx all around. The show is fresh, funny, and endearing. Nearly every episode is memorable and the writing is great.

Season Three: The writers decide to throw Earl in prison for what feels like the entire season. Predictably, the show starts to suck and get a little boring. Once Earl is released from prison the writers decide to dig themselves an even bigger hole of suckage by throwing Earl into a coma. Viewers are forced to watch his friends work on his list while he has constant flashbacks.

Season Four: I fire all the writers and fix things myself. (Note: This is just a prediction.)