The Xbox Dashboard update came out today. I fear that this may overshadow today’s biggest news – the Culdcept Saga demo is now available for download! 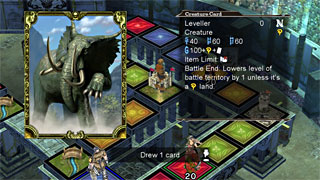 I’ve already played it about a dozen times. It’s so great, and so true to the original on the PS2 which I loved so much. As a sequel it doesn’t really introduce anything new in the gameplay department, though. The voiceovers are much better and things look great in HD of course. Playing online is new, and this is a game that can absolutely benefit from online play.

There seems to be a real problem with caching data from the disk, though. In fact I wonder if it does any caching at all…a lot of the animations skip, jump, and stutter as data is loaded in the background. I’ll chalk that up to it being a work in progress though.

Go download the Culdcept Saga demo immediately. It’s the one title that got me to buy an Xbox 360 back in the day…two years ago when it was first announced.

And oh yeah – Culdcept DS is in the works, too! It’s Japan-only for now though…