Honestly. What the hell is this. 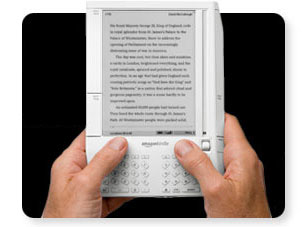 Amazon’s Kindle is trying to make e-books popular, and it’s doing it in the worst way.

It’s cool because
– it runs on Sprint’s EVDO network and doesn’t have a monthly fee or contract
– it’s got a super sharp screen
– it never needs to be connected to a computer. ever.

It’s horrible because
– there’s no backlight
– DRM
– RSS feeds cost you a buck or two per month. per feed!
– FREE books from the Gutenberg Project will cost you a dollar through Amazon.
– it looks like an 80s handheld electronic game: huge, clunky, plasticy, angular, awkward, ugly, hideous, atrocious, yadda yadda.

I’m not expecting Apple-caliber aesthetics on a product from Amazon, but good lord the Kindle is fugly and that’s its biggest flaw. That keyboard should have been retractable, like a slider phone! 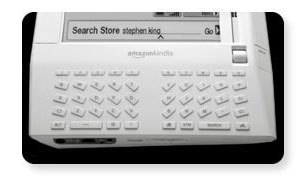 Would you really want to hold that device in your hand? I’d rather stare at it from afar in horror. Those corners could take an eye out.

The Kindle is also $400. Amazon should be giving these away. They’re selling you the blades, so the razor should be free! And if not free, then definitely no more than $50.

Yes, if you hate reading – books in particular – the Kindle should be right up your alley.

Here’s hoping that we’ll see Kindle 2.0 sooner rather than later.